It goes without saying that the Danes have a rich history in astronomy.  The Vikings are presumed to have navigated using star constellations as their guide and the first renowned astronomer, Peder Nattergal, was a Danish canon and mathematician.  A fascination with the celestial sky runs deep in Danish history. 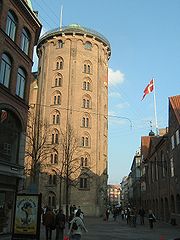 If ever you go to Copenhagen, by all means, visit the classic sights like The Little Mermaid and Nyhavn but try and fit in a visit to Rundetaarn (The Round Tower).  It’s an interesting and quirky place to visit – it is, in fact, the bell tower for Trinitatis Church as well as the functioning observatory Europe.  It also grants you great views across the rooftops of Copenhagen.

The Rundetaarn was commissioned by Christian IV of Denmark and its foundation stone was laid in 1637 and completed by 1642.  Even though it’s only 36m tall (118ft), you climb 209m (685ft) to get to the top because of the spiral, equestrian ‘staircase’ that winds around the core of the building.

On the way up (and down), you happen upon the Library that once housed the University’s books and which was frequented by Hans Christian Anderson.  Above that, you’ll find the Bell Loft for the church.  And look out for the toilet that the astronomers used to use.

Socrates once said that “Man must rise above the Earth—to the top of the atmosphere and beyond—for only thus will he fully understand the world in which he lives.”  When this tower first appeared on the Copenhagen skyline, it must have seemed like it was touching the sky – rising above the earth.  Reaching for the stars in all ways possible.

It’s a funny word ‘fishwife’.  Like many terms to describe women, it’s not entirely flattering to be called a ‘fishwife’.  It’s a word that’s come to mean a woman who’s a bit rough, coarse, loud and prone to swearing…

When we were holidaying in Sweden recently, as we were walking from Borstahusen (where we were camping at the fabulous Motesplats Borstahusen) to Landskrona, we happened upon a sculpture called ‘Borstahusgumman’ by Lena Lervik.

On Lena’s website, it says ‘Every morning Borstahusgumman pulled the trolleys with fish, the long road to Landskrona. Here she has stayed for a while to rest her back and at the friend who is looking at the horizon’

It’s got me to thinking about fishwives a little bit.  And I remembered the paintings by American artist Winslow Homer of the fishing women in Cullercoats, Tyneside.  Homer was particularly drawn to painting the women and manages to encapsulate both their femininity and their hardiness.

The women in Cullercoats had a reputation for their strength and physicality.  They not only cared for the family; they were also instrumental in the fishing work of the village.  The fisherwomen searched for bait throughout the day, helped bait the hooks, helped push the boats into the chilly North Sea and pulled them in again in the morning.  Like the Borstahusgumman, they were crucial to the life of the fishing community.

So I’ve decided that if ever I’m called a ‘fishwife’, I shall take that compliment.  Strong, capable, full of stamina, loud and forthright – qualities I’d be happy to own.

So sums up Robert Browning in his poem about the Pied Piper of Hamelin.  Or Hameln.

The Pied Piper theme runs thick through the town in Lower Saxony, Germany – and not surprisingly when your town (and ancestors) is the subject of one of the most famous folklore stories probably ever told.  Films, poems, songs and fairytales have been built around an event that still holds as much mystery today as it did about 800 years earlier.

The story that has evolved and developed over the centuries is one of a rat catcher who carries out his promise to rid the city of rats but is then cheated out of his payment by the town.  As a consequence, the ‘Pied Piper’ lures all but one of the children away – never to be seen again.

I’d always assumed that this was a completely made-up story but like most good folk tales or legends, it’s based on the fact that around 130 children did disappear from Hamelin around that time.  Apparently, the tale of the rats was added to the story later on (probably around the time when the Black Death swept across Europe).

The mystery still remains why these children disappeared.  Some are sinister – they were lured and abducted for various reasons.  Others centre around recruitment to a ‘Children’s Crusade’ or that there was a general migration happening at the time.  Whatever the reason, the tale has entertained generation after generation – and Hamelin still is a pleasant spot to visit.

Gill loves her Learning & Development Officer role with the Methodist Church covering the East Central Region.  She was delighted to be a representative at a conference in Chicago in April which brought together youth workers from across the US.  She is nearing the end of her Local Preacher training and should be fully-fledged this time next year!  She also fits in the role of  School Governor and is involved with the local Green Party.

Rob is enjoying life as a Supply Teacher which takes him to all sorts of schools within a 30 mile radius.  He continues to enjoy cycling as often as possible and has become more involved with the local branch of the NASUWT recently.  He has also taken up the guitar this year which he is really enjoying.

Max is enjoying his last year at primary school.  He is House Captain and enjoys being a Buddy in the lower school.  He’s represented the school in a number of sports competitions—namely hockey and athletics—and enjoys playing cricket in the summer months.  This year he passed his Grade 1 Piano (Merit) and Grade 1 Theory (Distinction) – the musical gene continues!

Our family holiday was one to remember. We flew to Seattle, spent a week driving to San Diego where we spent a week with Gill’s good friend Andrea (& her husband Keith) and then drove back up the Pacific Coast back to Seattle in the 3rd & final week.  We saw & did so much —cities, National Parks and just the amazing changing scenery. Simply stunning.

So now we wish you love, peace and joy for this Christmas and 2016!

We know that parental occupation has the biggest impact on educational attainment.

We know that the gap between the most wealthy and the least wealthy is marching at a pace in Britain.

We promote the idea of individuals ‘making a success’ with the myth that everyone can be ‘Dick Whittington’ but at the same time knowing that in our society, every occupational role makes a difference.

In a society that thrives on inequality, the teacher must promote universal progress at a production-like consistency.

The parents, students and politicians are entitled to demand that all children will attain a high level so that all can be at the top? All can make it with hard work?

What does that tell the child of the low-paid worker? That their parent had poor schooling – not that society thrives on inequality and luck.  Parenting and where you are born are also big factors.

Victorian Britain had some shocking schools.  It treated children in appalling ways and yet was a economic powerhouse.

Let’s wake up and recognise that we are making schooling the only solution to improving lives when it is far more complex than that.

On contemplating light and dark, I am confronted. I am confronted by the shadowy cloak that I allow to envelope me; to permeate my thoughts and actions. I hide in the shadows needing, and wanting, to step out into the light.

As I edge forward slowly, tentatively, out of that cocooning, inky darkness, I shield my eyes with my hands – blocking the bright, shining light which is causing me to blink and squint until I feel safe to open my eyes.

I glance back at the shadow from where I came but feel warmed, reassured, rejuvenated by the light that now surrounds me. I am nervous but realise that I am not alone. That I am comforted and affirmed by the company around me. My yearning, my seeking has brought me to this place.

It feels safe and familiar. I feel at home. I feel accepted. I feel ready for what the future brings. I feel hopeful. I feel alive.

What could be better for a cheese-crazy family than spending the Sunday of the May Day Bank Holiday Weekend at a cheese fair.  And not just any cheese fair but The Artisan Cheese Fair in the home of Stilton Cheese, Melton Mowbray.

This was our first visit to the Fair which is now in its fourth year – and it’s safe to say that we really enjoyed ourselves with over 40 different cheesemakers proffering their cheeses to taste – yum!  We decided that we would choose one cheese each to bring back with us.  I chose Mrs Kirkham’s Tasty Lancashire (from Goosnargh); Max chose Curworthy’s Devon Oke Cheddar and Rob opted for Tuxford and Tebbutt’s Stilton.   And of course, a Melton Mowbray Pork Pie made by hand at Brocklebys in Asfordby.

Rob caught an article on BBC World Service yesterday morning – and it summed up perfectly what we have recently been thinking about.  Adults need as much fun and play in their lives as children.  The article interviewed Cary Umhau, the Founder and Creative Director of SPACIOUS – a movement growing out of Washington D.C. that encourages people to break their chains and recapture the joy and excitement of wonder and play that most of us experienced as children.

Cary described meeting up in public spaces where all ages played lots of games – culminating in one big pie fight!  Grown ups who play feel less stressed, are more creative and feel better about themselves.

It seems that now more than ever, we could do with this in the UK.  We need to start finding our happy selves again – the ones that enjoy laughing and playing with friends, family and even better, strangers.   If our communities were happier places to live in, it wouldn’t matter how rich or poor, how stressed or tired we were.   Maybe then, we will start to rank higher in the range of wellbeing and happiness reports that often show us to be lower that most of the countries we consider ourselves to be like – such as Australia and the US.

As a family, we like to take a Summer Holiday camping in Europe.  No matter where we are, it never ceases to amaze me that our son can wonder along to the play area where he is usually the only Brit kid around and within minutes be happily playing with Dutch, German, Belgian children despite having no knowledge of his playmates native tongue.

We need to take a leaf out of our children’s book and take the opportunity to laugh and play – and rid ourselves of the barriers we put up for ourselves.

the spirituality of Music

A string of musings and meanderings on all things fun! With some music, drama and religion thrown in for good measure.

Sharing our love for music and how it shapes us as people of faith.

whispering life from the future

Your favourite carols and festive songs

Favourite places, new discoveries and all that delights